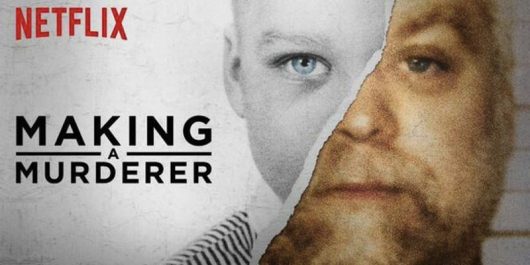 When it comes to watching shows I usually stick to my usuals: Vanderpump Rules, Real Housewives franchise, Law and Order Special Victims Unit, Married At First Sight and a few others. Lately, people have been talking about the the Netflix documentary called Making a Murderer. Just by the title I was pretty hesitant to watch the show, but then a close friend of mine said it was a similar topic to the first season of the hit podcast Serial. If you’re not familiar with the first season of Serial, it’s about a teenager named Adnan Syed who was arrested and charged with the murder of his ex girlfriend. There is no 100% conclusive evidence pointing the blame on him and it’s still a mystery as to why he was arrested and charged (for some people).

Debating on whether to watch the new season of The X-Files or Making a Murderer I decided to put on Netflix and watch the first episode of Making a Murder.  All I can say is holy smokes… The first episode draws you in and you just end up having to binge-watch it. It’s only 10 episodes (about an hour or so each) and each one dives deeper and deeper into the situation of this man who was imprisoned for 18 years on a crime he didn’t commit, then gets released due to DNA evidence, only to get arrested about two years later for a crime he believes he was framed for (still claims he’s innocent to this day) by the cops in Wisconsin.

While I don’t want to give away spoilers for those who haven’t seen the show, I will say this – at the end of the 10 episodes you will be questioning a lot of things about society, law enforcement and our judicial system.

Have you seen Making a Murderer yet?

In honor of #NationalLipstickDay, I mixed @toofaced #meltedmatteliquidlipstick in #SellOut as the base and #MisoPretty on top to make it a little lighter. Eye look featuring @colourpopcosmetics She pressed powder palette and @tartecosmetics foundation and concealer. Really digging this look today. #nationallipstickday💄 #lipstick #makeuplover #makeupaddict #sassysweetsf #beautyblogger #makeupblogger
So Leigh has been trying @teamiblends #skinnytea since Tuesday and she loves it! As a picky tea-drinker, she's been pleasantly surprised. Expect a blog post soon, but if you want to give it a shot, too, use coupon code Leigh10xo at checkout. #pickyteadrinker #teamiblends #thankyouteami #teamiloyalty #hacks #skinnytea #summerbod #🍶
Leigh is loving her @ipsy #glambag this month! Get the full details about these products on our site - link in bio!! . . . #sassysweetsf #makeup #ipsy #ipsyglambag #makeup #beauty #makeuplover #glam
And we are back! To kick off our return, Leigh shares her latest @oldnavy haul featuring #spring and #summer essentials! Link in bio. #fashion #oldnavy #dresses #floral #floralprint #flowyshirts #flowydresses #sassysweetsf #warmweather