Well fashionistas, it’s the end of awards season. The Oscars bring out the stylists’ big guns, and we expect full-on Hollywood glitz and glamour. The stars didn’t disappoint, and I was glad to see a couple of risks on a night that many play it safe. Here are my best and worst dressed picks below.

White dresses had their moment this year, as well as plunging necklines.

Brie Larson in Gucci – Such a beautiful and feminine dress. The sheer fabric along the bust created the perfect balance of sexy and classy, and the belt really pulled the whole outfit together and added a wow factor. I was also in love with her hair and want to try the pulled back look with simple twists on myself sometime.

Olivia Wilde Valentino Haute Couture – I think there will be some mixed opinions on this one, but I had to put her on the best dressed list purely for the gorgeous back detail on this dress (I’ll call them “wings”). The architectural pleats are modern and chic, and the choker is on-trend (they’re supposedly making a huge comeback).

Naomi Watts in Armani Privé – I just couldn’t get over the colors of this dress as she walked down the carpet – simply stunning. She took a risk and it definitely paid off. The only thing I would change is to give her a simpler, more modern necklace – the one she has on is a little prissy for this dress.

Charlize Theron in Dior Haute Couture – A beautiful woman in a bright red dress with a plunging neckline…do I need to say more? Simple and stunning.

Priyanka Chopra in Zuhair Murad – I like that she went in a different direction with the white dress trend and chose a beautiful white lace/beaded accent with a sheer underlay dress. She accessorized with huge diamond earrings and rings and an edgy belt that all went together beautifully.

Saoirse Ronan in Calvin Klein Collection – I wasn’t sure about the mismatched earrings at first, but when I heard the story behind her jewelry and dress (she chose the green to honor Ireland, both the subject of her film and her home as a child) I got on board with the overall look. The color of green she chose is stunning and the dress fits her well.

Lady Gaga in Brandon Maxwell – One of the only women to show up in pants. I love the architectural structuring around the bust. I’m still not a fan of her hair (wig?) and makeup, and wish she would just go with something more natural looking. When you see her grouped with other women like this, you can see how her hair and makeup never looks as natural and effortless as other starlets.

Cate Blanchett in Armani Privé – I can guarantee this dress will have some mixed feelings as well (like Olivia Wilde’s dress). But you can’t deny how perfect the color is on Cate. I also appreciate how different this dress was from everything else on the carpet. I wish the appliques on the shoulders were less pronounced, but other than that her look is perfection.

When it comes to worst dressed, the Oscars don’t tend to be as shocking as other awards shows, as everyone tries to bring their A-game. However, there were still enough ill-fitting garments and what-were-you-thinking dresses (looking at you Heidi Klum) to compose a worst dressed group.

Alicia Vikander in Louis Vuitton – The color is fun on her, but many said it was reminiscent of Belle from Beauty and the Beast. I think that hi-lo hem is a little overplayed, and the whole thing just felt too princess-y with all of the glittering crystal accents and accessories. It made her appear much younger than her 27 years.

Whoopi Goldberg in Dames of New York – I appreciate her making the effort and wearing a dress (as she’s usually in pants), but the neckline is not flattering on her body. It’s based on a dress that Bette Davis wore in All About Eve, but it just doesn’t work well on Whoopi. The black color is also too severe on her – a bright jewel tone would have been so pretty.

Heidi Klum in Marchesa – By far the worst. It looks like a nightmare bridesmaid dress that always ends up in movies (you know, the ones you would never think anyone would actually make their friends wear in real life). The flowers, the awkward billowy one sleeve, the unflattering poufiness of the layered tulle skirt…the list goes on. Just bad. 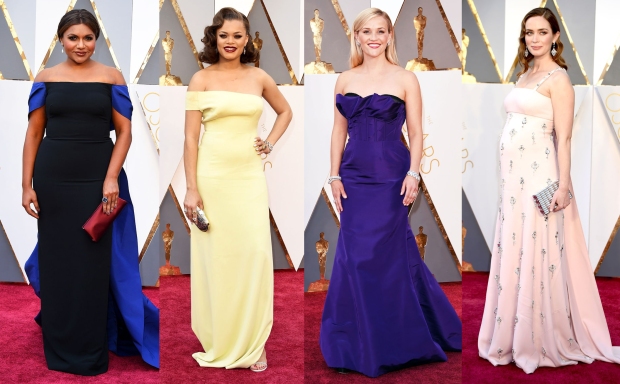 Mindy Kaling in Elizabeth Kennedy – This dress isn’t the worst, but the bust area just looked so tight and constricted on her. It also feels a little matronly for an actress still in her 30s. But I love the pop of blue with the otherwise simple black gown.

Andra Day in SAFiYAA – The bust on this dress is so ill-fitting it’s not even funny. Why is it so droopy? What is going on in there? The dress is also way too long and needed to be hemmed, as it’s pooling at the floor.

Reese Witherspoon in Oscar de la Renta – Though the color is beautiful, I’m not a fan of what’s happening in the bust area – the ruffles make the whole area look lumpy. Also, the hip area seems to be pulling and doesn’t look like it’s fitting properly.

Emily Blunt in Prada – There is nothing wrong with a pregnant belly on the red carpet, but I’ve just seen it done much better than this (ie – Chrissy Teigen in Marchesa). The style feels like a high school homecoming dress to me, and the light pink with the empire waist makes it all a little too cutesy for the Oscars. Not the worst, but she could have done better.

Well, that’s a wrap! Did I miss any of your favorites or least favorites?